Today’s AJ Cousin Connection is the one and only Thomas Edison, an American inventor and businessman.  Here’s five things you may or may not know about Thomas: 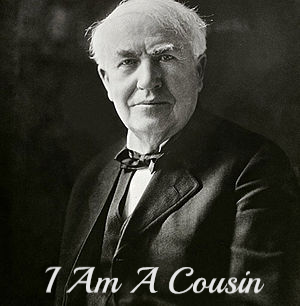 1. Thomas Edison was one of the first inventors to use mass production and large-scale teamwork to process his inventions. For this he was dubbed “The Wizard of Menlo Park”.

3. Edison only attended school for 3 months.  His mind would wander, his teacher called him “addled” and so his mother taught him from home.  Thomas later said, “My mother was the making of me. She was so true, so sure of me; and I felt I had something to live for, someone I must not disappoint.”

5. Edison’s last breath is reportedly contained in a test tube at the Henry Ford Museum. Ford reportedly convinced Charles Edison to seal a test tube of air in the inventor’s room shortly after his death, as a memento. [1]

Thomas Alva Edison and AJ Jacobs have 25 degrees of separation.