Thoughts from the Chief Cousin Coordinator

Hi Cousins! My name is Eowyn and I’m the Chief Cousin Coordinator for the Global Family Reunion.  I was scheduled to give a speech at the actual Reunion but it didn’t exactly work out that way.  So here is what I would have said had I taken the stage: 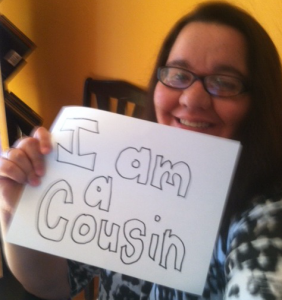 When I first started on this journey with AJ to plan this epic gathering, I had no idea what I was getting into.  I’m not sure he knew either which was probably not a bad thing.

I heard about AJ’s plans for the world’s biggest family reunion in January of last year when he did an interview about it on NPR.  I also work for an online genealogy site called WikiTree.com which is a collaborative family tree site that is free and accessible for everyone.  The mission of WikiTree is essentially to connect the world together in one big tree where people can work collaboratively on their family history.  That idea fell nicely in line with AJ’s vision of the Global Family Reunion and so we reached out to see if we could help.

This wasn’t the first time I’d heard of AJ Jacobs.   I became acquainted with him, at least through his writings, several years prior when I came across his book The Know-It-All while roaming a bookstore one day.  Once upon a time, I too had the notion that I would read the entire Encyclopedia Britannica but unlike AJ, I gave up somewhere around aardvark.  I figured if I wasn’t going to read the entire Encyclopedia Britannica, the least I could do was read the book written by the guy who managed to accomplish such a feat.

It was exciting to hear about his new project involving family history and at WikiTree we were delighted to help him with some of the research he was embarking on.  Even more thrilling, for me, was when AJ called to see if I wanted to be part of his Global Family Reunion team.  Who could turn down an opportunity like that?! Not to mention, we’re only 25 steps apart on the Global Tree, so it’s not like I could say no to family.

I started dabbling in family history research when I was about 14 and I would tag along with my mom to the local LDS church where she was a family history consultant. It was a hobby I turned to off and on for many years until about 6 years ago when it went rather quickly and unexpectedly from being a hobby to a profession.  In all that time, this has to be one of the coolest things I’ve ever been a part of.

One of the outcomes stemming from our efforts that I love best is that this idea of a Global Family is lighting a spark in people who either had never thought much about where they came from or who grew up in a less than ideal family environment and have always felt a desire just to belong somewhere.

Alex Haley said “In all of us there is a hunger, marrow deep, to know our heritage – to know who we are and where we came from. Without this enriching knowledge, there is a hallow yearning. No matter what our attainments in life, there is still a vacuum, an emptiness and the most disquieting loneliness.”

This statement resonates with me because I’m adopted. Don’t get me wrong – I have an amazing family with wonderful parents, an awesome brother and two perfect nieces I would do anything for.   I spent plenty of time researching my parents’ ancestors because to me that was my family.  It’s like Boyd K. Packer said “The process of searching, the means of going after those names is worth all the effort you could invest. The reason: you cannot research names without knowing they represent people.  When we research our own lines we become interested in more than just names, we seek to find them – and know them.”

But still, there was always a part of me that wondered about the people I physically came from.  Where were the people who looked like me? Where did they come from?  In 2004,  I accidentally found my birth mother.   See, I’m a birth mother myself, with a child I placed for adoption a few years earlier.  By 2004, I was working in a bookstore and one day noticed there were only 2 adoption books on the shelves, and not only that, but that they were very technically written.  I found this frustrating because adoption is anything but technical, it’s an incredibly emotional experience whether you are the child, biological family or adoptive family. I decided I would write a book about adoption that captured the real essence of it.

A few days later I was on some adoption site looking at statistics and a pop-up window appeared (I was sure I had those blocked). “Click here to see who is looking for you!”, it declared. I rolled my eyes, sure that IF anyone were looking for me, there’s no way it was here. Still, for whatever reason, I went ahead and entered what I knew about my birth and hit submit.  BAM.  A few seconds later I’m staring at a profile that my birth mother and her family had submitted several years prior.  It had her name, her siblings names, my biological father’s name and his siblings.  I about fell out of my chair.  I’d wondered about these people for years but had never really tried to find them, partly because I had no idea where to start looking and partly because I wasn’t sure what I would do if I did find them.  Suddenly there they were.

It took me a few weeks to track down my birth mother’s brother and discover he lived only about an hour from me.  I called him, nervously, as you might imagine.  He answered and I gave him my birth mother’s name and asked if he knew how I could get in touch with her.  “Who are you?” He asked skeptically which sure did not help my nerves. “Ummm….. I’m pretty sure I’m her daughter?”  I tossed out hesitantly.  There was a really long pause on the other end and then he spoke again in a much friendlier tone.  “I guess that makes me your uncle!”  I smiled. “Yep, I’m pretty sure that’s how that works.”  We hung up the phone and shortly after my birth mother called me. Her first question: “Do you hate me?”  I’m forever grateful that I had the opportunity to assure her I absolutely did not and to thank her for the choice she had made. 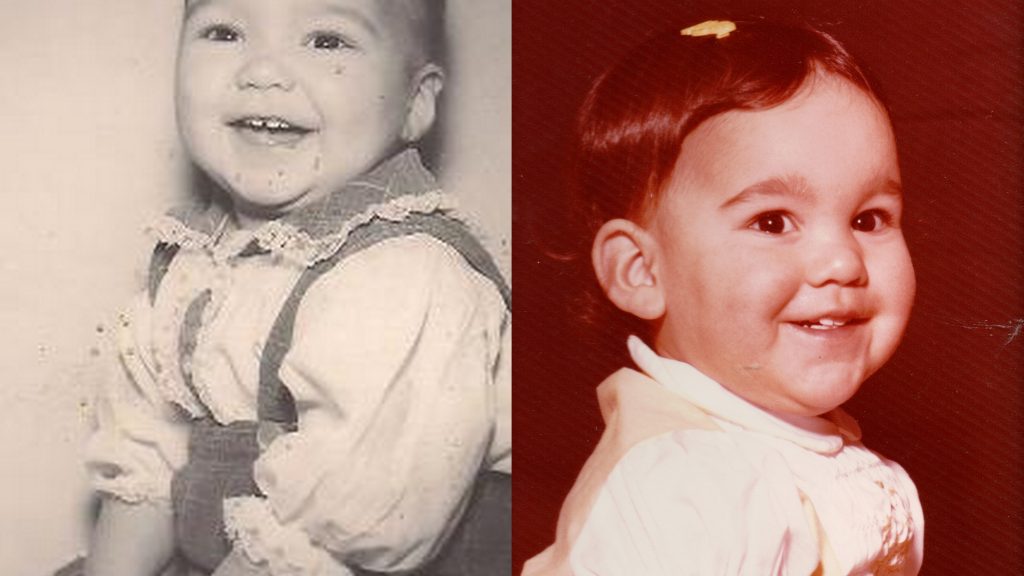 Me and my birth mother (I’m the one in color)

I have since been able to get to know her, her living family and research many of the ones who have passed on.  It’s been a truly wonderful experience. My biological father’s family is still a mystery but thanks to the amazing advances in DNA I hope to be able to find enough close-ish cousins to piece together his part of my family tree.  These are experiences I would wish for anyone who doesn’t know where they came from.

It’s been an honor and a beautiful thing to help people connect to something larger than themselves, to give them a sense of belonging and to help them know who they are.  That is, to me, in a nutshell, what the Global Family Reunion is all about.

Since AJ first started on this journey two years ago, we’ve received nearly 50,000 requests from people wanting to know where they fit into the Global Family.  In the last year, our dedicated volunteer researchers have worked steadily to find as many cousin connections as possible.  We’ve connected more than 1,000 different surnames in over 100 countries and on every continent except Antarctica.

The idea that we are all connected might not be new to all of us but it is certainly something that should make us stop and think.  What does it really mean to be connected to every person you meet? The other day, I was sitting on a bench in Central Park, watching as people wandered past.  As each one passed, I really tried to take a good look at them and instead of thinking to myself things like “Hey, I like her shoes” or “What were they thinking when they left dressed like that?”  I found myself wondering how I might be connected to them.  What was their story? Who did they come from? Where along our ancestral trails would our paths cross? It struck me that no matter how different someone might seem from me, even if they appeared to be my exact opposite, that somewhere, no matter what, we could find common ground in whatever our connection might be.  That’s a powerful tool that can turn our hearts to people we might otherwise dismiss.

I’m also honored to be part of an event that’s focused on raising money to help fight such a devastating disease, one that wipes away history if it’s not captured.  It’s great and important to look to the past but don’t forget the stories of the people who surround you.  You never know when those precious memories might be gone. Like Paul Simon wrote “Long ago it must be, I have a photograph, preserve your memories, they’re all that’s left you.”  Talk to you parents, your grandparents if you still have them, and find ways to record and cherish the stories that they’ll share with you.

And lastly, this brings me to all of you!   Laurence Overmire gave us this to ponder: “Over the course of the millenia, all these multitudes of ancestors, generation upon generation, have come down to this moment in time – to give birth to you.  There has never been, nor, will ever be another like you.  What will you do with your time on the Earth? How will you contribute to the ongoing story of humankind?”

So, after today, maybe we’ll focus a little more on where we fit into this great big Global Family Tree, what that means in how we treat the people around us and what story we’ll write on our own leaves in the tree.  Just something to think about.