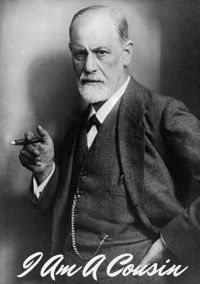 Some interesting things about Dr. Freud:

1. Freud was an avid smoker, first of cigarettes, and then he switched entirely to cigars.  By 1923, he had developed cancer of the jaw. Physically sick and tired, Freud committed suicide with the help of his doctor and his daughter Anna, just 22 days after the beginning of the World War II. He injected himself with a two-centigram dose of morphine.  This threw him into a coma from which he never awakened.

2. Freud considered himself an atheist and who thought God and religion were illusions that blinded the masses, but interestingly was extremely superstitious. He saw magical properties in numbers. He often claimed that the numbers 23 and 28 appeared in dates, telephone numbers and hotel reservations throughout his life. He even predicted that he would die at 51, the result of adding 23 and 28. He was wrong about that though and died at the age of 83.

3. Sigmund Freud was a brilliant man. Not only had he graduated from medical school and become a neurologist by the time he was 30, he also spoke and/or read eight languages: German, Hebrew, Latin, Greek, French, English, Spanish and Italian.

4. He said “Words have a magical power. They can bring either the greatest happiness or deepest despair; they can transfer knowledge from teacher to student; words enable the orator to sway his audience and dictate its decisions. Words are capable of arousing the strongest emotions and prompting all men’s actions.”

5.  He also said “The great question that has never been answered, and which I have not yet been able to answer, despite my thirty years of research into the feminine soul, is “What does a woman want?””

AJ Jacobs and Sigmund Freud have 23 degrees of separation.  Here’s what that looks like: