Today’s AJ Cousin Connection is Neil Armstrong, astronaut and first man to walk on the moon!

Some fun facts about Neil: 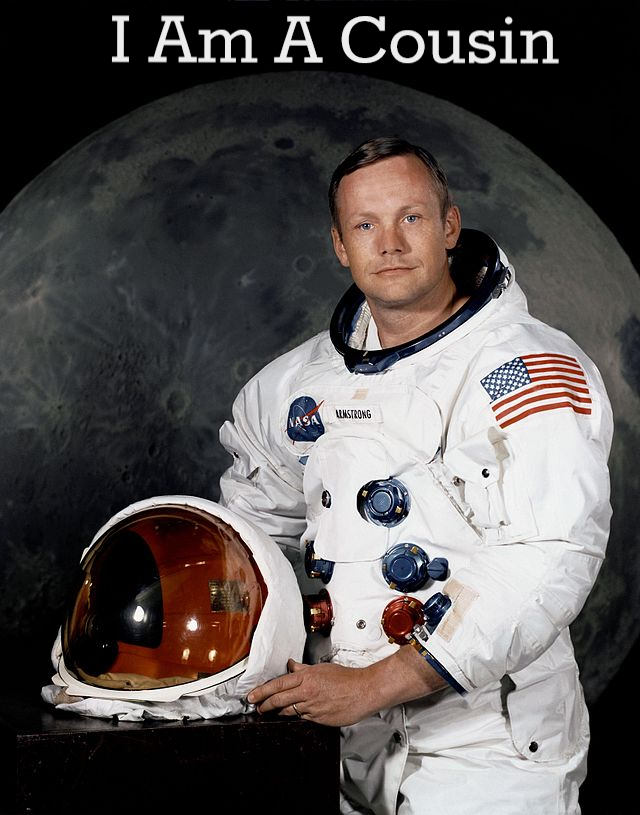 1. In high school, Neil took up the baritone horn (kind of a cross between the trumpet and trombone).  He liked the instrument’s distinctive tone. He performed not only in his school orchestra but was also in a combo, the Mississippi Moonshiners

2. On his NASA application, Armstrong marked “no religious preference”.  According to Hansen’s book, however, Armstrong actually considered himself a deist, a person whose faith in God is based on reason rather than religious revelation or the teachings of a particular church. Thomas Jefferson was also a deist.

3. What Neil said on the moon is different than what the world thought it heard.  What he actually said was “One small step for a man,” which makes a lot more sense. In 2006, an Australian researcher analyzed the recording and discovered that due to limitations of communication technology at the time, a few milliseconds of what the astronaut said had been dropped.

4. When he was 10 years old, Neil was paid $1 to mow the cemetery in Wapakoneta, Ohio, the small town where he was born. One of many odd jobs Armstrong had around town, he eventually earned enough money to pay for $9-per-hour flying lessons.  Neil loved flying so much he had a pilot’s license before his driver’s license!

5.  Neil was a test pilot. He could fly over 200 different types of aircraft from the dangerous rocket plane the X-15—which could reach a top speed of 4,000 miles per hour (!!!)—to gliders, which he called sailplanes.

“I am, and ever will be, a white-socks, pocket-protector, nerdy engineer, born under the second law of thermodynamics, steeped in steam tables, in love with free-body diagrams, transformed by Laplace and propelled by compressible flow.”- Neil Armstrong

Neil Armstrong and A.J. Jacobs have 32 degrees of separation. Here’s what that looks like: