One thing that will keep coming up when you run with genealogists of any sort are sources, like we talked about last time. They are just *that* important. No matter what the source, be it the 1790 United States Census confirming your fifth great grandpa’s home in Virginia or the back of the cereal box that told you George Washington’s mother’s name was Mary Ball or the parish records from Zbiroh, Bohemia showing your second great grandmother’s birth date, you need to put it in your notes. That includes family stories.

Family stories can be great for little clues to big finds. One thing I have loved to do for years is to take my notebook (or smartphone for you savvy sorts) with me to visit relatives and take notes about the stories they tell. When your grandfather starts talking about his grandparents living in Sweden, their profession, what their trip over on the ship was like, where they settled, that child who died in infancy, the other one who married the doctor in that small town in Minnesota, and so on, all of that is great to use for clues in your search for where your family was at certain times. Sources tend to lead to other sources, and family stories are great for that.
One caution with family stories-they aren’t always true! That doesn’t mean they won’t help, though. My family had a story about my third great grandfather that had been in the family for ages and was rather beloved. I was the unfortunate bearer of bad news as I got further into researching our heritage. The story was that that grandfather had been a member of the Scottish navy and had gone AWOL while on leave in Nova Scotia, changing his name from Saxton to Brown and starting a family there. Well, his name was always Brown and he immigrated from England, not Scotland, with his young wife to be a miner and raise a family. No navy. No name changes. But there was truth there-he did live in Nova Scotia, he was an immigrant, and his name was Brown. All those correct clues helped me find the truth and add to my family lines.
No matter the story-that you’re descended from Thomas Jefferson or that your great Uncle Jim Bob owned the service station is Sapulpa-they are sources, and should be put down as such. They make great additions to your own story, too, giving you an idea of who your ancestors were. Every member and detail to your story you can add will help get you one step closer to finding how you’re a cousin to all of us. 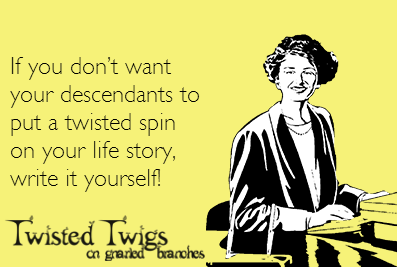 (image courtesy of Twisted Twigs on Gnarled Branches)
Tweet This