A scholarly study released on December 2, 2014 informs the world that it’s pretty much as certain as can be that a skeleton found in 2012 under a parking lot in Leicester, England constitutes the remains of that country’s King Richard III (1452-1485); a man infamous thanks to his portrayal by Shakespeare (and the rumor born during his life that he had his nephews murdered in order to be king).

The study, titled “Identification of the remains of King Richard III”*, published December 2, 2014 in Nature Communications (one of professional science’s premier peer revue journals) by a team at the University of Leicester in the UK, conveys the findings and details of a great deal of analyses undertaken on the skeletal remains found there two years ago under a parking lot of a man who’d died in the Middle Ages and had been, allegedly, when he walked the earth, none other than Richard III, last king of the storied Plantagenet dynasty. You might have heard of some of this colorful bunch: Richard the Lion Heart & his Magna Carta-signing brother John; their dad, Henry II (or: Eleanor of Aquitaine’s husband); or one of the Edwards (I – III) or any of the Henry’s (III, but IV through VI are more famous thanks to Shakespeare and Kenneth Branagh).

The study also relates the results of the sequencing of his genome–his DNA–the first time a full rundown has been done on a figure from history, from that time period and from a monarchical family. This includes revealing his Y-DNA and what they found in a comparison carried out between it and that of five living relatives. Y-DNA–the chromosome that determines maleness–is passed generation to generation, father to son practically identically and always fits into one of about 25 particular kinds, or haplogroups, so reliably that this type of analysis allows for enforceable laws when, for instance, a son’s paternity is in question. And it turns out that Richard III’s does NOT match that of the consensus Y-DNA of those living relatives.

What exactly does that mean and why is this big news? The import of this news derives from implications of the information. It could mean, among other things, that the War of the Roses–the well-known struggles over England’s rulership that lasted over 100 years– was more intense and scandal-riddled than already known, because it could mean that one or various kings might not have had any actual blood claim to the throne on which they might’ve sat. Because on paper, i.e., according to the official family trees, all of these guys were and are descended in their male lines–meaning following just their dads and dad’s dads etc–from the same guy, their “uber”-granddad: England’s King Edward III (1312-1377; whose death can also be seen as the precipitant to the “War of the Roses”).

Since Richard III was descended in his dad’s male line from one of Edward III’s sons (3 generations between Ed 3 and Rich 3), and the living guys are descended from another of Edward III’s sons (~20 generations between Ed 3 and them), the Y-DNA from all of them is supposed to match. But it doesn’t. Thus the “on paper” family trees have at least one mistake, and potentially more. And given the many links between Richard III and these living men, determining exactly where the falsely_ reported father or fathers were is very VERY hard to pin down.

And this is why many of us have been on the edge of our seats following this story. The idea was that we’d learn the Y-DNA of a family, the Plantagenets, that gave England 14 kings across 350 years from 1133 to 1485. But since there’s no match, it can’t be said which of the two, if either, is the one that was ostensibly being passed down the line, lo those many years.

It’s quite worth noting that the study does not hold much in the way of speculation, though it does offer context and briefly addresses these matters. We’re expanding on this particular issue a bit so as to offer more context than followers of the story probably have. So who were these Plantagenets? They were the male descendants of Matilda (1102-1167)–granddaughter of William the Conqueror and rightful heir to the English crown–who were fathered by her husband Geoffrey V, Count of Anjou, (1113-1151) whose nickname “Plantagenet” became the sort of functional surname of this bunch a couple hundred years after Geoffrey’s and Matilda’s time.

Geoffrey’s Y-DNA (as yet, still unknown) was inherited by his and Matilda’s son, Henry, who, through right of his mother, became King Henry II of England. He passed it on to his sons, two of whom became kings in due time: Richard I and John. The five men who were tracked down and tested for this study are named “Somerset”, and descend from Edward III through his son John of Gaunt (1340-1399), the same son who sired the line of Henry’s IV though VI, but through a different mother than Henry IV. Interestingly, of the five living descendants of Somerset they found, one didn’t match the other four. But that four did match seemed encouraging. Richard III’s not matching definitely thickens the plot. 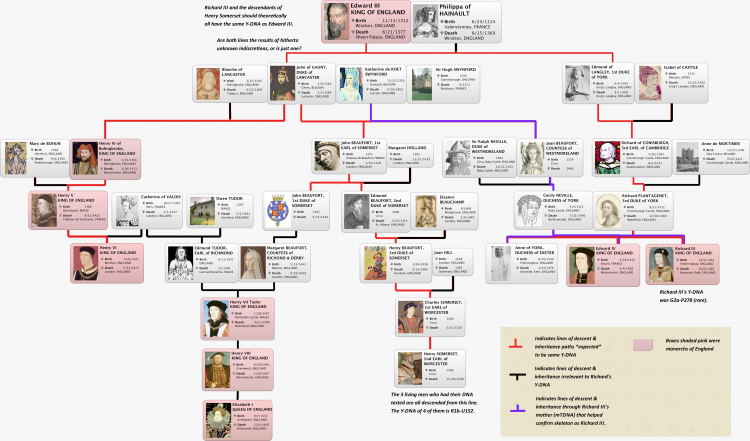 Among the many father-son links that could’ve been a different dad than who’s listed on Ye Olde Family Tree there are two known cases on the Beaufort-Somerset line of sons’ born out of wedlock (illegitimately). However, these sons were both accepted, openly acknowledged and ultimately legitimated by the fathers in both cases. In reverse chronological order:

Case #1: Henry Beaufort 3rd Duke of Somerset (1436-1464) & Charles Somerset 1st Earl of Worcester (1460-1526). There isn’t really any particular, stand-out evidence that the latter of those might have been fathered by another man. (We’ll report should this change.)

Case # 2: John of Gaunt, Duke of Lancaster & John Beaufort, 1st Earl of Somerset (1373-1410). Beaufort was the first of four kids between the Duke of Lancaster and Katherine Swynford, all of whom were born out of wedlock, and yet all of whom were also not only legally legitimated after John and Katherine finally married, but accepted and claimed from birth by John. That said, though, when they began their affair Katherine was married to Sir Hugh Swynford, a faithful knight of John of Gaunt’s who died in 1372…Beaufort was born, so it seems, in 1373, though this fact seems to elude hard data; point being that when he was conceived, Katherine’s husband Hugh Swynford could very well have still been alive alive. Could he be the actual progenitor of the Beaufort/Somerset line? A hidden reason why the line was banned from any claim to the throne?

Though not mentioned in the study or any of the other press I’ve yet seen on this, there’s a third case that seems worth mentioning.

Case #3: Edmund of Langley, Duke of York (1341-1402) & Richard of Conisborough, 3rd Earl of Cambridge (1385-1415). John of Gaunt’s younger brother married Isabel of Castile, (princess from Spain). It was apparently well known at the time that Ed & Isabel didn’t dig each other, and it was rumored she had an affair with a notorious cad about the court, John de Holland, 1st Duke of Exeter. Could he have been the real father of Richard of Conisborough? (grandfather to Richard III; see chart.)

Depending where your guesswork hypothesizes a different dad than history reports, the implications for possibly pretender-kings shift. It’s important to note that it actually doesn’t bear on Britain’s currently ruling royal family, btw. 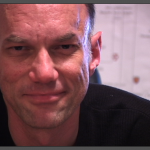 Kylen Campbell is a writer and media producer in Oakland, California. He’s been doing genealogy since learning how in the “brick ‘n’ mortar” days of research (i.e., before the internet) at the Mormon’s Family History Library near where he grew up in Arizona. His abiding interest in it–and belief in its value and relevance–went with him to college, and he earned his BA in American Studies from Hampshire College in Amherst, Massachusetts, studying under eminent historians Joseph Ellis, Stephen B. Oates and Steve Nissenbaum, writing narrative history based in the lives of some of his ancestors aimed at making history less dry to wider audiences. Later, for the official book commemorating President Clinton’s second inauguration he produced a historical introduction researched in the Smithsonian and enlisted documentary filmmaker Ken Burns to write the essay framing the section. He has been a journalist covering technology trends, including for TV, contributing to an Emmy-awarded program, and a teacher. His writing has appeared on CNBC.com and in the Village Voice covering music. He blogs about being a dad and is finally in the process of becoming a board-certified genealogist.