Today’s AJ Cousin Connection is Napoleon Bonaparte, the French military and political leader who rose to prominence during the latter part of the French Revolution.

Here are some fun facts about Napoleon: 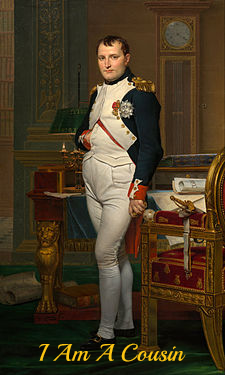 1. Often credited with originating the phrase “a picture is worth 1,000 words,” what Napoleon actually said was “A good sketch is better than a long speech.”

2. The former Emperor is still very much revered – it is illegal for anyone in France to name a pig “Napoleon”.

3. Napoleon enjoyed disguising as a bourgeois or wearing poor clothes to walk Paris, asking questions to people. This way, he could know how popular he was, and how people felt about him, and his policies. He actually had a lot of fun doing that.

4. It is said that he only slept minutes while he was in campaign. Usually he would take naps of between 5 and 10 minutes and wake up fully refreshed for battle.

5. Napoleon loved hats. During his reign, he bore 170 unique hats.

6. He was deathly afraid of cats!

A.J. Jacobs and Napoleon Bonaparte have 19 degrees of separation.