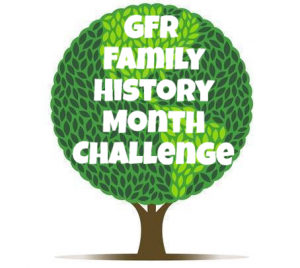 Ready for Day 28? Here it is: Record your own personal life story.  Whether that is in a written journal, a blog or a video journal, start telling the story of your life so that your descendants will be able to know all about you!

Ready for Day 27? Here it is: Discover your family health history. This can be a useful tool to aid you and your doctors and caregivers in understanding patterns of health and illness for you and your descendants. Learning these things now could potentially save a family member!

Ready for Day 26? Here it is: Transcribe a record. There are so many records out there just waiting to be discovered by distant relatives, but they can’t until they’re transcribed onto the net. Volunteer a little time to help a site like FamilySearch.org or Mocavo.com put more out there for folks to search.

How many of us have been researching for years now? When was the last time you went back over some of the original people in your tree-most likely your grandparents, great grandparents, and great great grandparents? With new records being added daily to places like FamilySearch, Ancestry.com, AmericanAncestors.org, MyHeritage, GenWeb sites, and more, it pays off to go looking again. Just the other day Abby found a new record for her husband’s grandfather that indicated a wife before his grandmother that no one had spoken of! Go, give them a fresh perspective!

Ready for Day 24? Here it is: Ask your family for some of your ancestral recipes. Food is so important to so much of our family culture, but think about how many of those dishes get forgotten over time unless someone makes a point to ask about them.

Add them to the records you keep for the person who used make them. Make a few up and take pictures and notes about it. Our families love to try (at least once) some of the things we know great, great grandparents used to eat.

Ready for Day 23? Here it is: Can’t make it to the big Reunion next June in New York? Get with some of your local family and plan a satellite reunion to watch the live streamed events and plan your own fun. Let us know so we can put it on the site, and be sure to let local news outlets know so you have a great turn out!

For more details on hosting your own event, see our Branch Party FAQ!

Ready for Day 22?Here it is: Start a One Place Study.

A One Place Study is a branch of family history and/or local history with a focus on the entire population of a single road, village or community, not just a single, geographically dispersed family line.

You can gain a greater understanding of your own personal genealogy by learning about your ancestors’ neighbors and studying the historical environment and events that took place within a specific locality.

Ready for Day 21?Here it is: Have you thought about what will happen to your research and collection of photos and heirlooms when your gone? We all hope someone in our family will care for them but also have heard the horror stories of the box of photos and documents being thrown in the trash at the estate auction. Don’t let that be you-plan ahead! Let your family know if they don’t want it, to donate it to a local historical society or library. And don’t forget your online work. Make sure you let someone know what to do/who can handle those trees. It is never too early to plan for the inevitable.

“I Am A Cousin”: Ron Norman 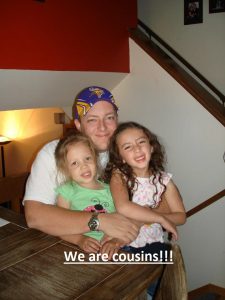 1.    Tell us a little about yourself.  Where are you from? What do you do for work? Fun? Married? Kids? You get that idea.

I am a native Coloradan and would be lost without the Rocky Mountains (they are always in the West and act as my compass). I have been married to my wife, Christi (my high school sweetheart) for nine years and we have two daughters that are both in elementary school. I have been a nurse for ten years and have worked in the Intensive Care Unit, Emergency Department, Hospital Quality/Patient Safety and now work in an outpatient Dialysis Clinic.

I find all of my ancestors interesting, but I am partial to my great great grandfather, Erick Elliason/Norman (Norman-1078). Erick emigrated to Minnesota from Vilhelmina, Sweden in 1907 with his brother Isak to find a better life for their families. Both Isak and Erick ended up with the last name of Norman since they didn’t have a non-patronymic surname. Erick’s wife, Emerentia joined him the next year with their 4 children including my great-grandfather, Ernest Erick Norman. The middle name Erick has been passed down each generation to include me. We gave my youngest daughter the middle name Ericka to continue this tradition. If it wasn’t for Erick’s courage to make the move to America and his strong work ethic that he passed down, I doubt that my family and I would be here today. 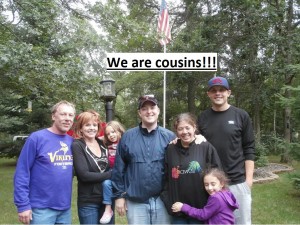 3.    If you could be related to anyone in history, who would you want it to be and why?

My wife and I think it would be interesting to be related to Gandhi as we both find his life inspiring.

4.    What are your thoughts on the Global Family Reunion? Will you be attending?

I was excited to hear about AJ’s plan to hold the Global Family Reunion. I joined the project almost immediately and have enjoyed finding as many connections as possible. I would love to attend, but may have to check out one of the satellite locations as New York is a little far from here.

5.    Do you come from a big family? Small family? Do you guys have family reunions and do you have any good family reunion stories?

My parents had just me and my brother. My mother came from a family of three (she is a twin) and my father came from a family of 9 children (1 girl and 8 boys!). Holidays are always quite the gathering as many of my father’s siblings remain in Colorado. Also each year the Norman’s have a reunion in Minnesota which can gather quite the crowd. Last summer I took my wife and girls to Minnesota for the first time where we were able to visit some of my ancestors and I was able to discuss my grandmother’s family with her sister who has been involved in genealogy for some time.

6.    Favorite color? Favorite food? Left-handed or right-handed? Do you like to have breakfast for dinner? Favorite book? Movie? TV show? Song/band? Quote?

Blue. Manicotti. I am a southpaw. Who doesn’t like brinner? As far as books, there are too many to pick one. The Princess Bride or Monty Python and the Holy Grail. Game of Thrones. Weird Al Yankovic. “I think one’s feelings waste themselves in words; they ought all to be distilled into actions which bring results.” Florence Nightingale

7.    Do you have any funny quirks that you’ve inherited from your family?

I attribute my sense of humor to my family.

8.    Do you know much about your family history? Where do your ancestors come from? Would you want to visit the lands they hail from?

When I started my journey in genealogy, I only knew of my Swedish roots and that our last name was not Norman when my family was in Sweden. Past that, I had very little knowledge of where my family came from. Nearly two years later, I have connected myself to the Global Family Reunion and the worldwide tree.

I would love to travel outside of the US to visit many of the countries that my family hails from, especially Sweden as I feel the greatest connection there.

9.    If you could get AJ to invite one person to the Global Family Reunion, who would it be and why?

I would love to see Sir Patrick Stewart there, I am a fan of his work and he seems like a fun guy. Also he could bring along his pal Sir Ian McKellen. This also would be fitting since I had uncovered AJ’s connection to the current British royal family.

10.    AJ’s idea is that if the people of the world could see how interconnected we all are maybe we would be a little nicer to one another.  What do you think about that?

I absolutely agree with AJ’s thoughts on this. I know the more I look into the lives of my family and others, I find a deeper appreciation for their struggles and triumphs.

11.    If you could share one message with your 7 billion cousins what would it be?

I suppose it would be to write on the back of your photos to save the future generations a great deal of headaches. I was reconnected with a photo of my 4x great grandparents because someone wrote on the back of the photo. I know of many “orphaned” photos out there that do not have the same happy ending.

Ready for Day 20?Here it is: Have you tried genetic DNA yet? Now is a perfect time get involved. Take the plunge and have a test done. They continue to become more and more affordable, and if you can talk some other family members into taking one, too, the data you’ll get will blow you away.

Check out 23andMe and FamilyTreeDNA!